On Saturday, November 10, the Schultz Campus for Jewish Life will host its annual Campus Gala themed “Celebrating Our Community.” Campus Gala honorees Rob and Andrea Minster and Tikkun Olam award recipients Alan and Janice Woll will be recognized. Committed to giving back, both couples are role models in the Akron and Jewish communities for their longtime devotion and personal commitment to making Akron, and the world, a better place to live.

The funds raised at the Campus Gala directly benefit the Shaw JCC of Akron, The Lippman School and Jewish Family Service of Akron. These nonprofit educational and outreach agencies located at the Schultz Campus offer important programs and services for all members of the Akron community from newborns to seniors. Tickets and personalized tribute ads may be purchased in support of these agencies. For more information, visit www.jewishakron.org/campus-gala or call 330-835-0025. 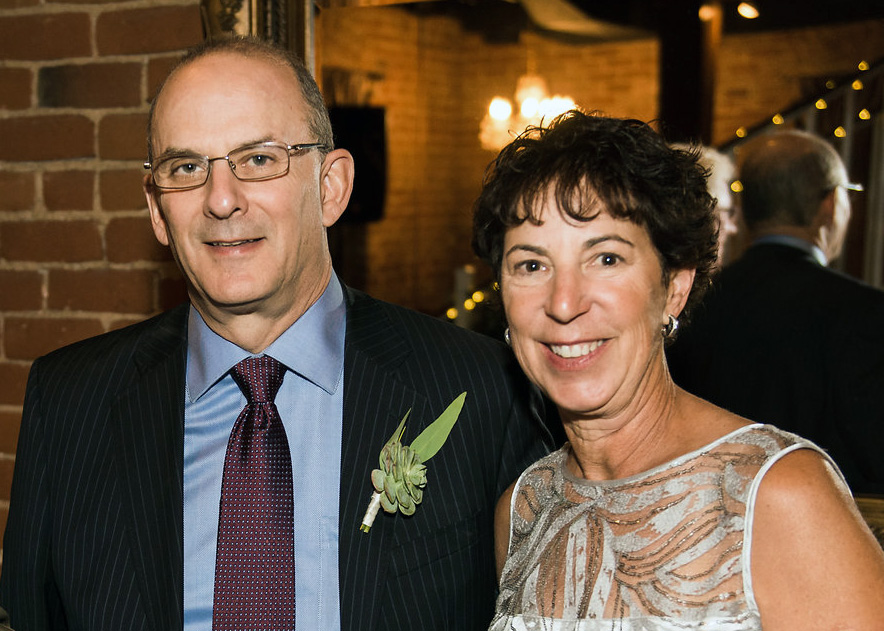 This year's Campus Gala honorees are Rob and Andrea Minster, recognized for their longstanding devotion to the Akron Jewish community. Since birth, both have been actively involved, and in fact, the couple met as Shaw JCC sports camp counselors in 1977.

Rob graduated with a Master’s in Taxation from University of Akron where began his career as a CPA.  Later, he joined his family as the fourth generation to work at Belenky, Inc. where he still works today. Andrea was granted one of the first athletic scholarships under Title IX to play tennis at Kent State University where she graduated with a B.S. in health and physical education. She and her mother started a window treatment company, Pretty Panes, in 1985 that she still owns and operates. Andrea was also a tennis coach for Copley High School for 18 years.

Rob has served on various boards from the Jewish Community Board of Akron (JCBA), Shaw JCC of Akron, Jewish Family Service of Akron (JFS) and Beth El Congregation to the West Akron Baseball League and Akron Blind Center.  He is a past president of JCBA and JFS and is the current president of Hillel at Kent State, where he has been a board member since 2006 and was one of the campaign chairs to raise funds to build the Cohn Jewish Student Center.  Andrea has served as the co-president for Women’s American ORT, was a member of the first ORT National Young Leadership Group, served on the Shaw JCC’s Women’s Auxiliary, Na’Amat, Beth El Sisterhood, JCBA Women’s Board, JCC Board and various community committees such as Super Sunday where both she and Rob served as committee chairs.

Both received the Young Leadership Award from Federation. Rob was honored by Hillel at Kent State in 2014 and is a frequent blood donor to the American Red Cross, with over 100 donations. Andrea was inducted into the Akron Jewish Sports Hall of Fame as well as the Copley Sports Hall of Fame.  With all of their accomplishments, their most meaningful one has been watching their family grow to become successful, happy and equally philanthropic adults.

Both were raised to understand the importance and responsibility of community service from their families. Rob’s father Stan Minster is a past president of the Shaw JCC and was the chair of the Lippman Day School expansion. His mother MaryAnn has been involved in Na’Amat and the Center Auxiliary for decades. Rob and Andrea are motivated by their children, Stacey, Kevin and Emily, their spouses Devin, Lori and Mike and their grandson Benjamin to continue to provide a Jewish future full of family, tradition and a sense of community.

"The community has done far more for us and my family than we have done for the community,” Rob and Andrea say in response to their recognition. “The Jewish institutions in Akron are vital to the health and survival of a Jewish Akron. They allow community members to connect to their Jewish beliefs and traditions in whatever manner each person wishes to connect. We have been inspired by the contributions of our family, friends and community leaders. We are thankful for the opportunities we have had to benefit as participants and to give back in some small ways.” 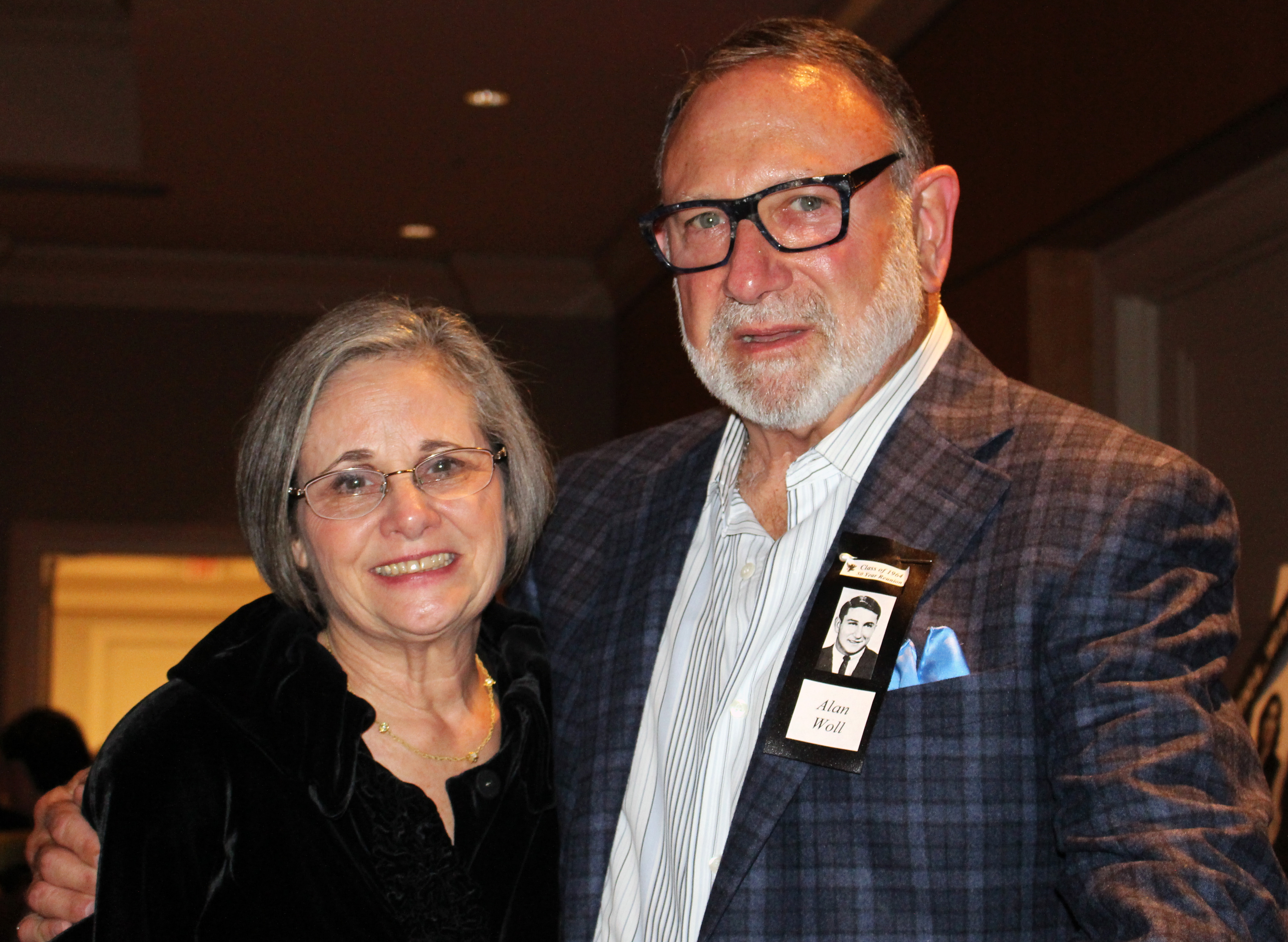 Alan and Janice Woll will receive the Tikkun Olam award at the Campus Gala this year. Committed to giving back, the Wolls are role models in the Jewish community for both philanthropy and personal commitment to making Akron, and the world, a better place to live. “The community has been good to us,” say the Wolls. “We, along with our children and their children, grew up here, and we are still very much a part of the Jewish community that has nurtured us throughout the years. We want to continue ensuring and supporting a strong Jewish future in Akron.”

Alan and Janice started dating in tenth grade at Buchtel High School and married in 1968. Their children are Rachel and Scott Arnopolin, Jerrod and Andrea Woll, and Michael Woll and Gregory Orenstein. They have been blessed with four grandchildren – Raleigh and Cori Arnopolin and Jovie and Bodhi Woll.

In high school, Alan earned several letters in football and track and field and broke the Litchfield Middle School record by running the 100-yard dash in 10.3 seconds. He attended the University of Akron where he played football on a full athletic scholarship. In 2017, Alan was inducted into the Akron Jewish Sports Hall of Fame for his achievements.

Alan began his career as a salesman for Akron plastics maker E. Helman Company. In 1986, he co-founded Network Polymers and later started Diamond Polymers In 2013, he sold the business to A. Schulman and started the Alan J. Woll Family Fund of the Akron Community Foundation and the Alan and Janice Woll Family Philanthropic Fund of the Jewish Community Board of Akron, so he and his family could give back to the community they love.

Janice is a retired art teacher, having worked for several years in the Akron Public School District and later at St. Hillary’s. Before she went back to teaching, she worked several years as an education consultant for Carson-Dellosa Publishing and owned her own giftware company that specialized in personalized gifts. The arts were her passion, so she returned to school to get her art degree so she could teach art.

Over the years, Alan and Janice have been involved in numerous Jewish and community causes. Both are long-time members of Beth El Congregation. For many years, Janice was an avid Friday minyan-goer. She was a volunteer with the Knitzvah project and a member of the Beth El Sisterhood. Alan served on Beth El’s Endowment Committee. For several years, the Wolls funded the luncheon for the Synaplex program. Janice was also active in Daughters of Israel. She worked with Bonnie Cohen, Kathy Salem, Karen Halpern and Esther Hexter to create the mosaic tile project found on the walls of the Shaw JCC lobby. The project raised $30,000 for arts programming in the community.

In 2007, Janice chaired the gala opening event at the Akron Art Museum, where she also served as a docent. Alan served as president of Rosemont Country Club and chaired its golf tournament in addition to supporting charitable causes such as the Cystic Fibrosis Foundation, CJD, the Akron-Canton Regional Food Bank, University Hospital, The University of Akron and the Northeast Ohio Medical University.

The impact of their philanthropy can be seen and felt throughout the Schultz Campus for Jewish Life. In 2015, they helped make the Shaw JCC indoor pool renovation a reality. And in 2017, they helped to transform The Lippman School’s library into a new innovation center filled with cutting-edge technologies for students and the community alike. The library was renamed the Woll Family Center for Innovation in their honor.